Sunday, January 23 2022 - Welcome
Top Posts
Where do I vote is Trending on Google
Leo Friedman Explains How He Saved His Business IPromo From COVID-19
Sean Foreman, Presidential election party rules
What is Organic Clothing?
Legend of the Mothman & Its Illinois Connection
Top Issues That Concern Voters In 2020
The Plight of the Whistleblower: Heroes or Snitches
How To Properly Develop and Protect Your Business
Kratom: What Is It and Is It Safe?
Home Articles The Five Underrated Cartoons in the 2000s 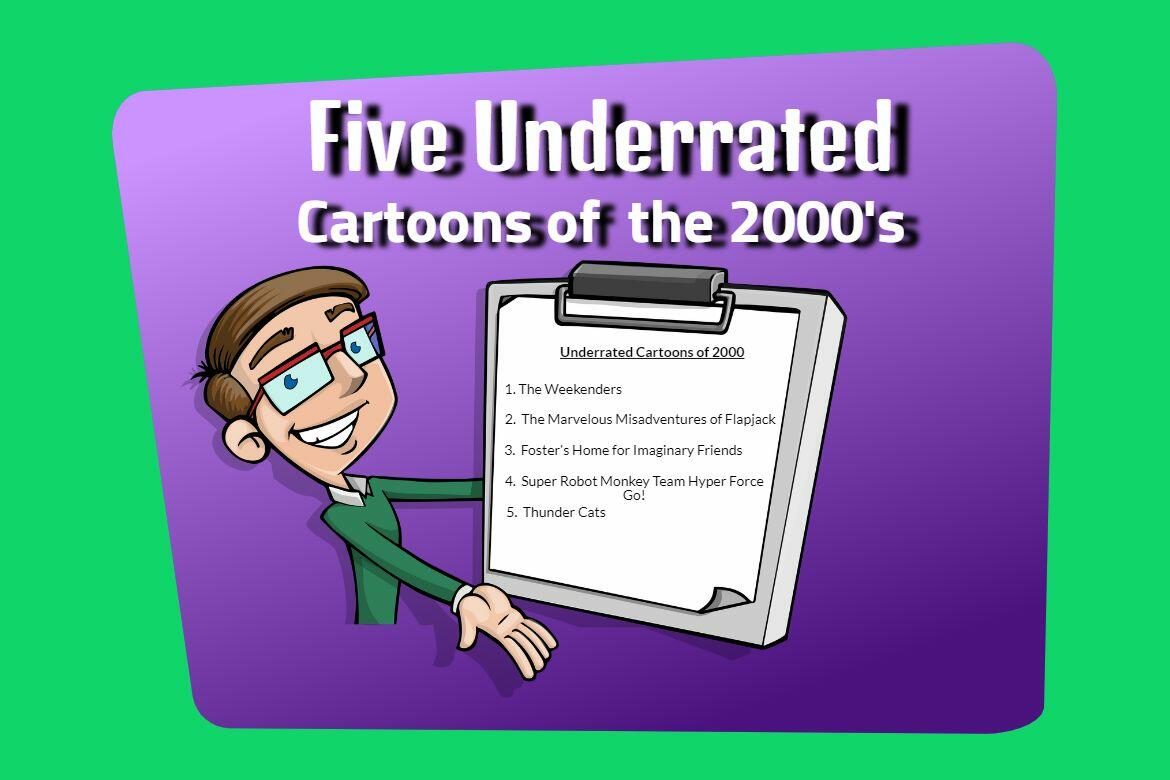 I am a millennial, and I grew up on a variety of cartoons. Some of the cartoons I watched were not that good and others, still resonate with me. There are some cartoons that I wish they reboot or reimagining. Here are my top five underrated cartoons in the 2000’s; this is in no particular order.

Premise: The Weekenders premiered on February 26, 2000. It aired in Disney’s One Morning Block with shows like Recess and Pepper Ann. The show was based on four diverse 12-year-old 7th graders that hung out on the weekend. The Weekenders were broken down into two segments in one episode. The show premiered on ABC. However, it later moved to UPN, and from UPN, it moved and finished at Toon Disney. The Weekenders had 39 episodes and the last episode aired on February 29, 2004.

What made it underrated?: This was a coming of age story. These kids tackled a lot of issues such as relationships, being made fun of, peer pressure. The network jumps also affected the show. For two seasons, the show was on ABC and then on the third season, which consisted of 13 episodes, and it aired on UPN. The fourth and final season consisted of five episodes aired on Toon Disney. Again if you were a fan of the show, you had difficulty keeping up with it, especially before pre-categorized internet.

The Marvelous Misadventures of Flapjack

Premise: The Marvelous Misadventures of Flapjack pilot consisted of two episodes, and it had five shorts in between other cartoon network programming. The show officially premiered on June 5, 2008. The storyline was about this boy being raised by a talking whale, Flapjack, who leads a peaceful life until he rescues a pirate named Captain K’nuckles. Inspired by the adventurous pirate stories, Flapjack embarks on an adventure and sets out to search for Candied Island.

What made it underrated: The scheduling killed this show. The Marvelous Misadventures of Flapjack’s first two seasons consisted of twenty episodes and the final season consisted of six. Networks like Cartoon Network and Nickelodeon were notorious for taking twenty episodes airing it whenever they wanted to. You never knew when the show was officially on, and unfortunately, by the time you did catch it, you were catching reruns. They would even move them around. This was one of many shows that did stop animation, and they did it correctly.

Premise: The show is about a group of imaginary friends. These characters are real and come to life as soon as you imagine them. Once a child grows out of them, they are moved to an orphanage to stay until adopted by another child. The lovable, kind Madame Foster runs the home with her imaginary friend, a rabbit called Mr. Herriman, who is also the business manager, and her granddaughter Frankie, who helps with the day-to-day operations.

What made it underrated: The cartoon network scheduling is what killed this series. For whatever reason, this show was moved around too much. At times you would see it on in the evening, then during the afternoon, and then during the morning. It’s hard to be a fan and keep up with an undocumented schedule. The storyline suffered because of the schedule. The lack of consistency affects not only viewership but also the writers. You can’t create a fluid storyline that people are unable to follow. The imaginary friends had a lot of depth to them, and, unfortunately, Fosters was not given a proper chance; and by the way, if you revisit the show as an adult, you will realize it hits deeper now as adults; we understand a lot more.

Premise: Super Robot Monkey Team Hyper Force Go! It is about a boy named Chiro who was exploring the outskirts of Shuggazoom. He finds a robot and goes inside of it, and finds five robot monkeys in stasis. These monkey robots’ names are Sparx, Antauri, Gibson, Otto, and Nova. He awakens them, and when he does, he ends up getting infused with this energy called: the Power of Primate, which allows him to transform into this super warrior. The monkeys train Chiro because he does not have any superhero powers, so they teach him and hone his skills as a leader. When they fight larger enemies, they have the Super Robot. This robot consist of six vehicles.

What made it underrated: The show aired on ABC Family Jetix and then moved to Toon Disney. This show had everything. From the makings of a hero in Chiro, understanding the mystery of the monkeys and why they were created. They had this anime/power ranger feel to it. So what killed the show? Low merchandise sales. Many cartoons are vehicles to sell character merchandise. When those sales drop, they drop the show. The show was left on a cliffhanger because Disney refused to give it a season five. I have to say Disney is cold-blooded for that. At least Cartoon Network allows their shows to sign off by giving them a short season like four to five episodes. Not the mouse.

Premise: The Thundercats lived on Thundera; they were lead by Claudus, who has a son and heir to the throne Lion-O. Lizards led by Mumm-Ra attacks the kingdom one night. The Lizards and Mumm-Ra destroy Thundera. Mumm-Ra kills Claudius, and the cats are enslaved. A group of Thunderians who survived are led by Lion-O, who has the Sword of Omens. The remaining cats are looking for the book of omens, which has the way to defeat Mumm-Ra. They find the book, and when they do, they find out that they have not unit the species of third earth and find these three power stones. If Mumm-Ra finds them, he will be the most powerful being in the universe.

What made it underrated: This show was a reimaging of the 1987 Thundercats. They changed the story big time. This is not your mother’s Thundercats. This show was very mature, and Lion-O’s growth was remarkable. It made you invested in this character. Every character had a background story to them, and they had an element that made you attach to them. For example, Tygra was Lion-O’s adopted brother. He resented Lion-O was going to be the king because before Lion-O was born, he was the crown prince of Thundera. With Lion-O being born, there was a lot of resentment towards Lion O by Tygra because Lion-O will be the rightful heir to the throne. On top of this, the show had betrayal, jealousy, class systems, and resentment. They were drawn in an anime style.

With all of these things I listed, you may wonder what makes it underrated. Well, it is a combo of scheduling and toy sales. The show was bounced around all over the place, and they had low toy sales. So Cartoon Network canceled it. I will have to admit they are the ones that messed this up with their scheduling efforts. If they had been consistent with the show’s airing, maybe people would have brought the toys. I searched and found one of the toys available at Walmart by a third-party seller for 129.99. This is a Lynx Armor of Omens Lion-O. I looked at it, and I don’t see it being worth 129.99.

Music From Around The World: Episode 13